by Panic World
in United States
0 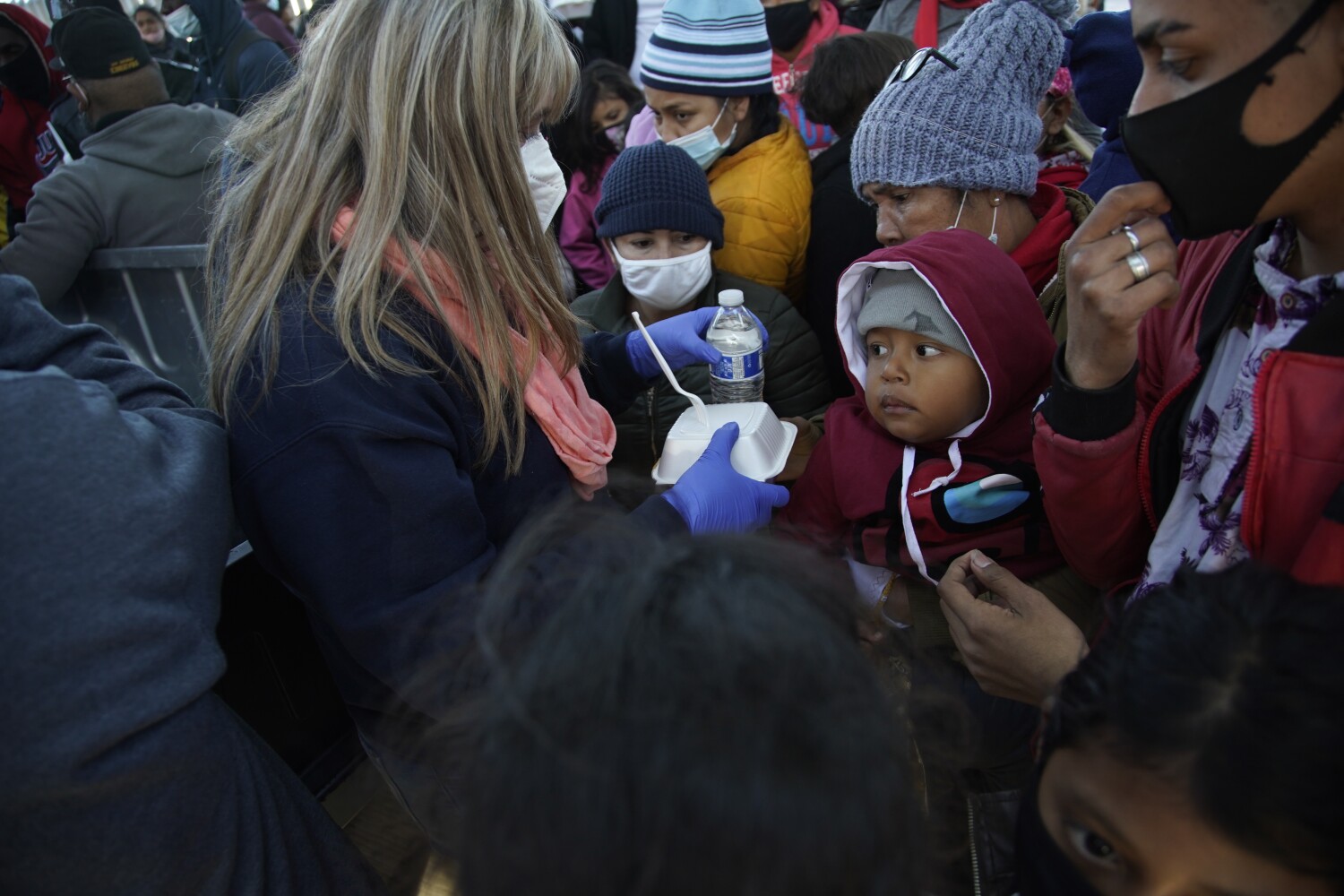 Two years and 21 days after the first asylum seeker was walked back from San Diego to Tijuana under the Trump administration’s “Remain in Mexico” program, a small group of asylum seekers was escorted in the other direction to wait out immigration court cases in the United States.

Under President Biden’s direction, border officials Friday began processing the first of the estimated 26,000 people who have pending cases in U.S. immigration courts and have been waiting in Mexico under the Trump administration’s program, officially known as Migrant Protection Protocols, or MPP.

The program radically altered the asylum system. It became one of former President Trump’s most successful attempts to restrict access to asylum and deter migrants from Latin America from seeking refuge in the United States.

Biden last month ordered a pause on adding new asylum seekers to the program but has not ended it for those already waiting in Mexico.

The U.S. State Department in a news release Friday referred to the initial processing of MPP returnees as a “drawdown,” language typically used for military operations overseas.

Two other ports of entry — El Paso and Brownsville, Texas — are expected to start similar processing as early as next week.

Jewish Family Service of San Diego confirmed before 11 a.m. that the 25 people who had MPP cases were in the organization’s care and had been quarantined in hotel rooms under the direction of county public health officials. Among them were six families and five individual adults from Honduras, Peru, Nicaragua, Guatemala and Cuba.

“This is a really different experience than 2½ years ago, when we got the call on our hotline that moms and kids were on the streets of San Diego,” said Michael Hopkins, chief executive of Jewish Family Service, referring to when, under the Trump administration, border officials began releasing asylum seekers without helping them get to their final U.S. destinations.

The first asylum seekers to enter the U.S. Friday were selected by the United Nations High Commissioner for Refugees, or UNHCR, in coordination with local groups that work with migrants in Tijuana, U.N. officials said Thursday in a call with reporters. The 25 asylum seekers went Thursday to the Centro Integrador migrant shelter in Tijuana to be tested for the coronavirus by the U.N. International Organization for Migration. They remained at the shelter overnight before being transported to the border.

The UNHCR launched an online platform Friday so people with active MPP cases can apply to enter the U.S. After the platform launched, it received more traffic than it could handle, and visitors received a message to try again later.

Once asylum seekers are able to use the platform, they can schedule phone appointments with UNHCR staff to go over their information and discuss any vulnerabilities that might make them a priority for entry.

The criteria of those vulnerabilities will be defined by the United States, U.N. officials said Thursday, and had not yet been finalized. The process is supposed to give priority to those people who have been waiting in Mexico the longest, U.N. officials said.

Once asylum seekers complete the registration process, they will be given a date to report to the federal shelter for coronavirus testing and will be taken to the border the next day.

Asylum seekers who are no longer in Mexico’s border cities will be aided in returning to the border by the International Organization for Migration, U.N. officials say.

In Matamoros, Mexico, across the border from Brownsville, more than 800 migrants are waiting in a camp, about two-thirds of them with MPP cases that are active or on appeal, said Andrea Lenier, director of strategic planning for the camp clinic run by nonprofit Global Response Management. The U.N. has started installing tents at the camp for MPP processing.

Texas and northern Mexico were still reeling Friday from a storm that triggered power outages and water shortages for millions on both sides of the border. At the camp, temperatures dipped below freezing as the storm dropped ice and snow.

“In camp, people are hopeful. But they’re also cold and miserable,” Lenier said.

Lenier and other advocates were concerned that migrants eligible to cross the border might be targeted by smugglers. “In Matamoros, people have been so vulnerable to exploitation, kidnapping and extortion,” she said, noting that she had shared these security concerns with the Biden administration, and it was responsive.

In Tijuana, roughly 200 asylum seekers who heard that processing was starting again slept Thursday night in El Chaparral plaza, outside the western part of the port of entry.

Among them was a woman from Honduras who fled her country with her entire family because of death threats. She asked not to be identified because she has not yet found safety.

“We can’t be here anymore,” she said in Spanish. “It hurts us to see our children in the street, but if we don’t have a way to give them something better, that is where we are.”

She was not part of the MPP program, and it is not clear when the United States might begin to allow in people in her situation.

Nearby, a man from Guatemala clutched documents showing that he had recently been attacked in Tijuana and feared remaining there. Human Rights First has documented more than 1,500 accounts of MPP asylum seekers being attacked in Mexico.

Rumors and misinformation had spread quickly by word of mouth and WhatsApp in the days before Friday. More asylum seekers arrived at the plaza Friday morning, asking for information and when it might be their turn to enter the U.S.

Staff with the organizations Al Otro Lado and Innovation Law Lab — which, along with Jewish Family Service, are part of the California welcoming task force working on both sides of the border — were in the plaza, passing out fliers in Spanish, English and Haitian Creole explaining the changes.

Jollisonn Gena, 28, from Haiti, said many of his countrymen had come to the border because they feel left out by the Biden administration’s policies.

MPP applied to people from Spanish-speaking countries in Central America, South America and the Caribbean, as well as Brazil, but generally did not apply to Haitians.

“I want the [U.S.] government to understand the situation of the Haitians,” Gena said. “If that program is for Central Americans, the Haitians will never cross. We want a program specifically for Haitians.”

He said he knew of Haitians who had recently been deported or expelled to Haiti, under another Trump policy that Biden has kept in place, and were then killed.

When MPP was first implemented, the American Civil Liberties Union sued the Trump administration. The Biden administration recently asked the Supreme Court to cancel oral arguments in that case, scheduled for this month.

“The Biden administration’s action is a welcome start toward ending this inhumanity,” said Judy Rabinovitz, lead counsel in the suit, “but it must move swiftly to remedy the life-threatening situation facing everyone affected by this policy.”

Andrew Meehan, a spokesman at Customs and Border Protection and Homeland Security under the Trump administration during a dramatic expansion of the MPP program, said the U.S. government “made a commitment to those migrants to deliver a result” and didn’t meet it.

Asked about the roughly 70,000 asylum seekers that U.S. officials knowingly forced back into some of the world’s most dangerous cities, and an internal report by senior Homeland Security officials that found Border Patrol pressured asylum officers into denying claims and obstructed access to asylum, Meehan responded, “The question ‘was it worth it?’ is an almost impossible question to answer.”

An official with U.S. Citizenship and Immigration Services and a former asylum officer who was required to conduct MPP interviews had harsh words for the
Biden administration.

“I’m disgusted that the program has not been abolished,” the official said, speaking on condition of anonymity to protect against professional retaliation. “And I mourn for all those who suffered and continue to because of it.”

Morrissey reported from Tijuana, Hennessy-Fiske from Houston and O’Toole from Washington.

Covid-19: Biden Says Vaccine Doses Could Be Available for All Adult Americans by End of May

This Website Puts Boisterous Children and Noisy Neighbors on the Map

40% of inmates in California have been vaccinated for COVID