‘I could just lean on her’: How our dogs saved us during the COVID-19 pandemic

KITCHENER —
It’s no secret that the COVID-19 pandemic has been hard on everyone; except for, perhaps, our dogs.

As offices moved into living rooms and bedrooms, dogs became our full-time coworkers.

People called off weekend plans and cancelled vacations, meaning there was more time to spend at home with four-legged friends.

When COVID-19 first shut down Waterloo Region back in March 2020, Kyra Lewis said she relied on her dog to help build a routine back into her day.

“I was kind of distraught at that moment about the circumstances and I was really worried about my family,” Lewis said. “Having something that could help me find some sense of normalcy was really amazing for my health.”

Lewis, a fourth-year varsity athlete on the University of Waterloo’s field hockey team, said having a dog around helped her get out of bed in the morning.

“I basically had every hour of the day doing something, before the pandemic,” she said. “As things started to change, I had a lot less stability.” 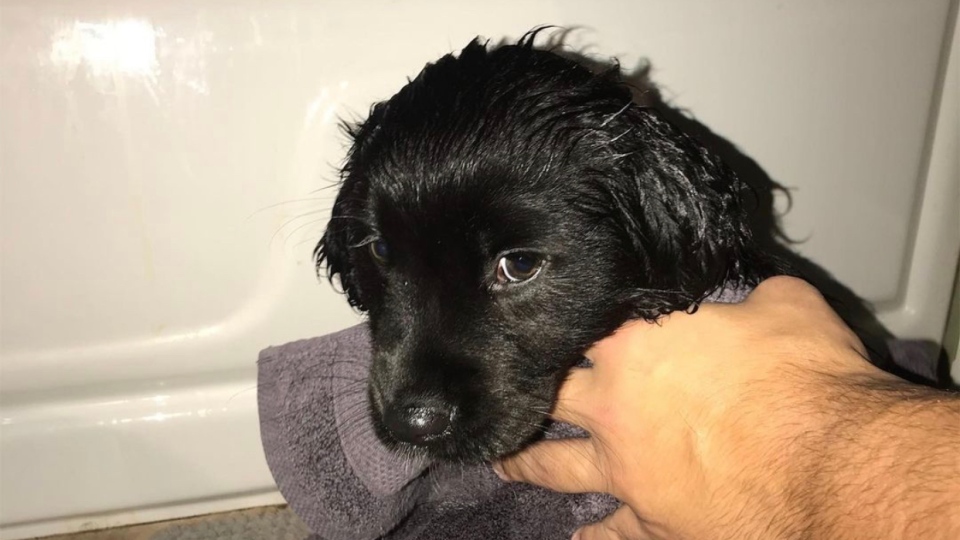 “Immediately every single hobby that I had sort of evaporated,” Lewis said. “I was quite sad and I was quite stressed, because at the time I was away from my family and it was really emotionally quite taxing because I was alone.”

Her dog, Athena, had come into her life just weeks before. Lewis said she decided to bring home a puppy to help manage stress due to an illness in her family.

“It’s almost like she knew when I was upset,” Lewis said. “I could just lean on her whenever I needed something.” 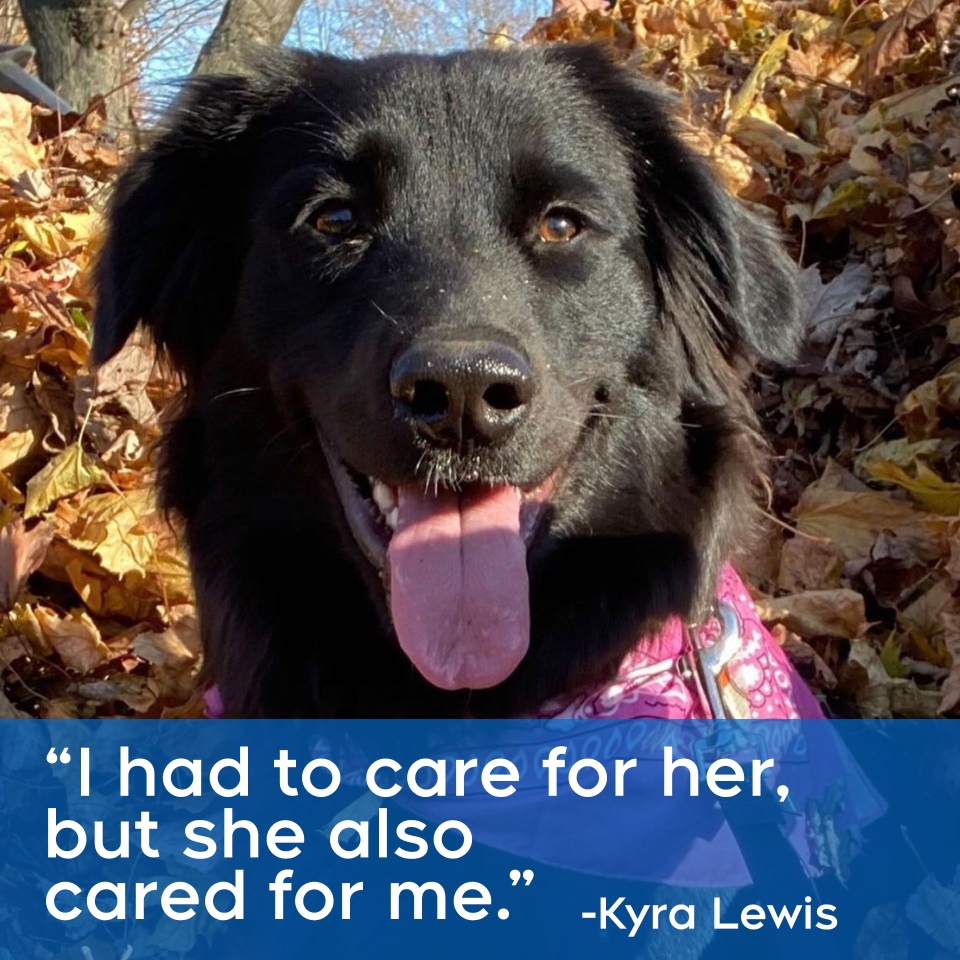 Looking after Athena gave Lewis structure to her day, when structure was hard to find.

“I had to care for her, but she also cared for me in the sense where she was always giving love all the time.”

Health officials across the country have encouraged people to head outside for exercise since the start of the pandemic, and there’s no better companion than a dog.

Dog-walking was still allowed under Ontario’s stay-at-home order and Quebec’s overnight curfew had an exemption for dogs. Some went so far as to offer to lend their dogs to people looking for a late-night walk. 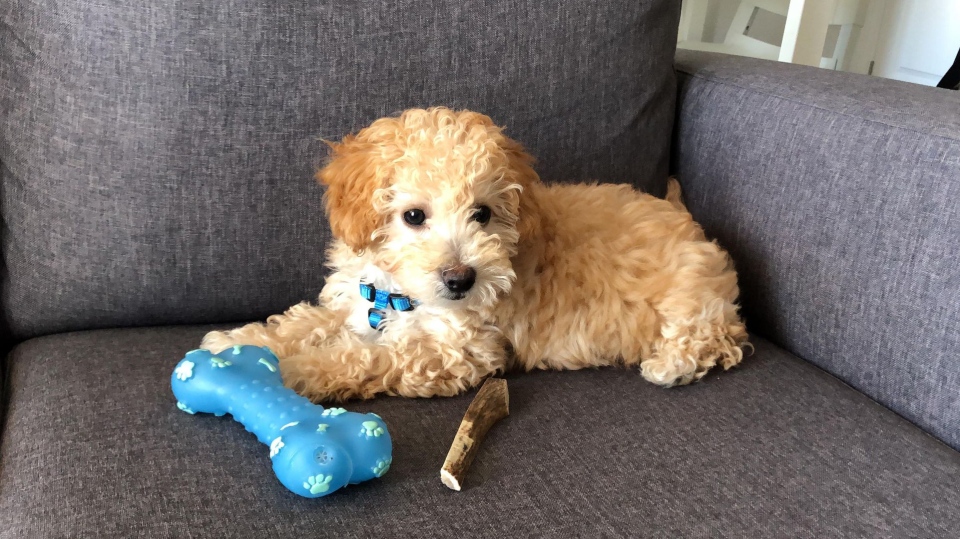 Meredith Gardiner, the director of adult services at the Canadian Mental Health Association Waterloo Wellington, said the pandemic has been hard on people’s mental health.

“It’s made life harder,” Gardiner said. “People are more isolated. It’s created an additional layer of isolation for people and made their social worlds much smaller.”

However, she said dogs can help combat those feelings of isolation.

“You have somebody that’s there that you can have a conversation with,” Gardiner said. “That companionship, specifically a dog, it helps people keep a focus in a routine. You have someone else that’s dependent on you and so requires you to get up, get at least enough dressed that you can take them for a walk.”

WHY STOP AT ONE?

Tara Wallace’s family decided to get a second dog when COVID-19 arrived in Waterloo Region.

“We were all going to be home, so it’s a great time to introduce another dog,” Wallace said. 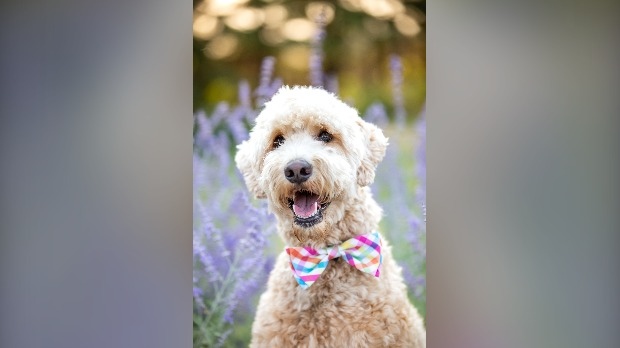 However, finding a dog at the start of the pandemic proved to be a bit of a challenge.

“Everybody was jacking up their prices,” Wallace said. “We didn’t think that we’d be able to find one.”

The Wallaces were able to find a dog in their price range and welcomed Pippin into their family in May.

“They’re great, because it’s just a way to relax and decompress from your day and something to look forward to,” Wallace said.

“We always enjoy the cuddles that they give us during the day, because it’s very relaxing for people who have anxiety and other mental health things to deal with.”

The family’s first dog, Molly, was already enjoying the attention with her family home all the time. 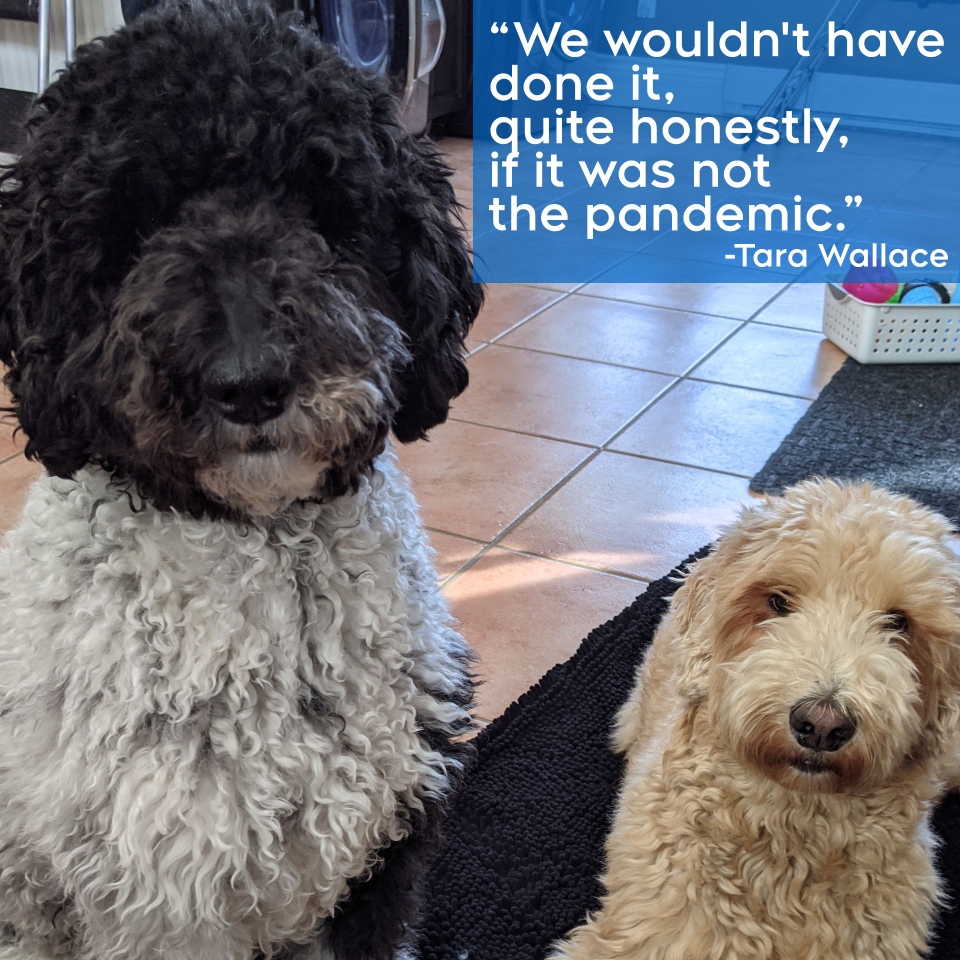 “She thought it was fantastic,” Wallace said.

It’s also made it easier for the family to train their new puppy.

Wallace, who lives in New Hamburg, is a teacher and said Pippin sleeps at her feet for most of the day. However, sometimes she’ll pop up on screen to say hello to the students.

WHAT WE DO FOR THEM, THEY DO FOR US

According to Gardiner, dogs’ need for a routine also helps people establish a schedule that may have been lost or altered as a result of pandemic restrictions.

“There’s regular meal times and feeding the animal and caring for the animal that is just beneficial,” she said. “There’s nothing better than that reward of coming to the door or that little wagging tail or a dog kiss on the cheek that just is really good for people and their mental health.”

Gardiner said it’s important for people to find structure in their day, looking for meaningful activities. 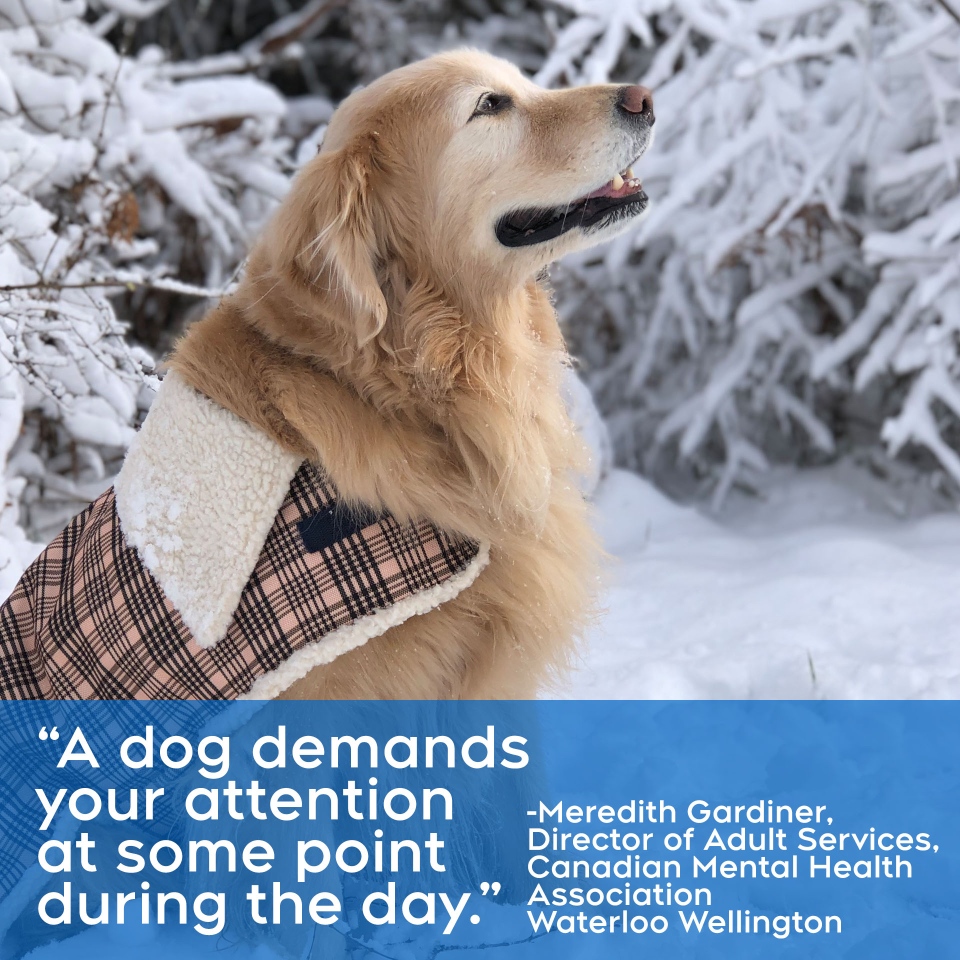 While working remotely and only needing to dress up your top half for video conferences may have been nice at the start of the pandemic, it’s gotten more difficult to live without structure as restrictions have dragged on.

“A dog requires you to actively care for it,” Gardiner said. “A dog demands your attention at some point during the day.”

Alex Schneider was forced to put down her dog, Alana, early on in the pandemic because of a neurological issue.

“It was really weird with the vet, like nobody being in there,” Schneider said. “You’re the only ones allowed in, which was the most uncomfortable, haunting experience ever.”

Without Alana, Schneider said her day completely lost its structure as the pandemic stretched from days to weeks to months. 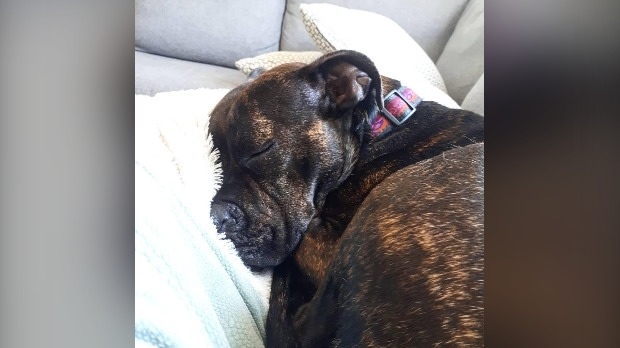 Schneider and her husband started looking for a new pet at the start of the first lockdown in the spring of 2020, but quickly found that most rescues weren’t open for adoptions.

In the end, they connected with a trainer at K9 Balance who had worked with Schneider and Alana. Soon, they added Violet to their family.

“It’s just good to keep a structure in your day and make sure that you’re actually going outside,” Schneider said. “I barely left my house because I don’t really have a reason.” 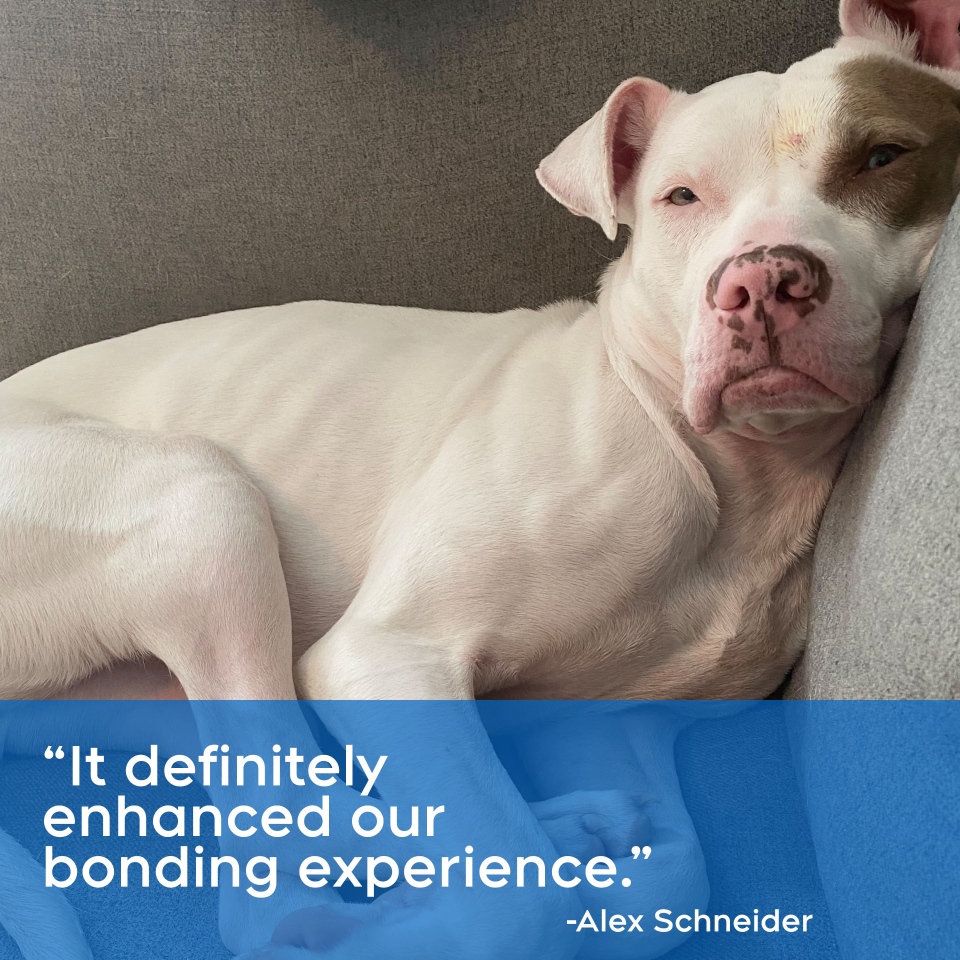 Violet has become part of the family very quickly, especially because Schneider and her husband are mostly working from home.

THE WAY WE ADOPT HAS CHANGED

The Humane Society of Kitchener Waterloo and Stratford Perth had to shut down their operations in March 2020 when lockdowns went into effect across Ontario. They were able to gradually reopen for adoptions as the year went on, but a lot of their processes have moved online.

Only the final meet-and-greet between a pet and a potential adopter is done in-person, according to Marketing and Communications Manager Anya Barradas.

Adoptions stopped again at the start of 2021 under the province’s stay-at-home order, but were able to open again when Waterloo Region moved into the red tier this week.

We are happy to announce that our adoptions will be opening this week. Please keep an eye on our website, as the animals gradually become available for adoption. Adoptions will be by appointment only and adopters MUST wear face masks in the Centre.#AdoptDontShop #humanesociety pic.twitter.com/O8NXtxj4oc

Barradas said the shelter didn’t see a large spike in adoptions like many others across the country. However, she said adoptions remained steady throughout the pandemic.

“We do a lot to ensure that animals stay with their owners whenever possible,” Barradas said. “We have an emergency pet food bank where anybody can contact us and they can get free food, free pet supplies.”

“The availability of animals for adoption during the pandemic has been lower at our centre as our focus was on ensuring animals remained in their homes whenever possible during the pandemic,” Executive Director Katherine Delutis said in an emailed statement. “We took in surrenders when we were the last resort and they could not remain in their homes.”

Delutis added the shelter wasn’t able to accept transfers from other northern communities or other countries, like Mexico, due to travel restrictions.

Barradas said the humane society’s foster program got a big boost as more people left their offices behind last spring.

“Because of the pandemic and a lot of people working from home, they’re able to care for the animals,” she said. “But, once things go back to normal, or whatever the new normal is, they may not be. Because fostering is a short-term commitment, people can still benefit from animal companionship, but they don’t have to worry about what they are going to have to do with the animal once things go back to normal.”

Our foster volunteer Daena shares her story of how she completely fell in love with one of her fosters, named Sprite.
Currently we are in urgent need of foster volunteers in the Stratford area. Please RT and apply to become a foster volunteer today at https://t.co/qIr11kla90. pic.twitter.com/S0iQN6XWbL

As more people add dogs to their lives to help with the difficulties of the pandemic, Gardiner said it’s important to remember a dog is a long-term commitment.

“It is a responsibility, the need to have a dog in your life when things return to the next phase of normal is going to look like,” she said.

Over the summer, Justine Sparling and Mackenzie Drinkwater launched an Instagram and Facebook account called “Dog Friendly KW,” offering tips on the best places to bring pups around the region.

“It’s been a really fun project to do during the pandemic,” Drinkwater said.

The account grew quickly and organically over the summer as people looked to spend more time with their dogs.

“I think there’s a huge appetite for folks to take their dog places, because more than ever, we’re embracing this culture of tourism in our own towns and our own cities,” Sparling said. “You can bring your dog with you.”

“I think there’s been a big appetite to involve your dogs more in your life as you explore more local areas and areas across the province.”

“You saw many local spots popping up, like parking lot patios,” Sparling said. “Those non-traditional spaces are more conducive to allowing dogs than maybe a traditional patio.”

Over the summer, the account focused on sharing dog-friendly patios throughout the region, along with stores that allowed pets inside. However, as the weather cooled off and restrictions tightened again, the pair shifted their focus to other activities people can do with their four-legged friends. Earlier this month, they posted a mini guide to help people wanting to mix up their walking routine.

“We’re really just getting creative, trying to find any ways to share inspiration with the community for them to still try new things with their dogs, even though options are limited right now,” Drinkwater said.

They’ve also launched a podcast, discussing everything from dog owner etiquette to their personal experiences with their pets during the pandemic.

Coronavirus: Canada’s vaccine arsenal could get another addition within weeks: senior health official

Coronavirus: ‘We need this:’ Getting COVID-19 vaccine to remote and urban Indigenous populations