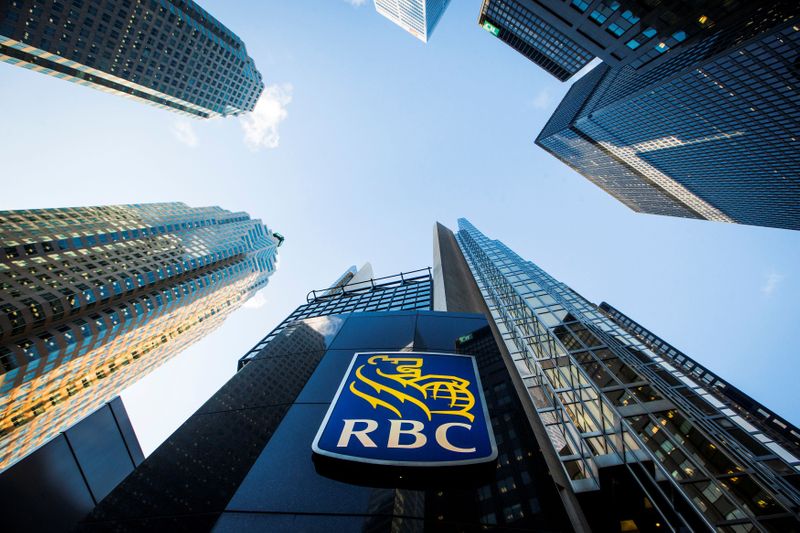 © Reuters. FILE PHOTO: A Royal Bank of Canada logo is seen on Bay Street in the heart of the financial district in Toronto

Banks’ profit margins are also expected to get a boost from rising 10-year bond yields in Canada and the United States in future quarters as short-term rates remain near zero. Banks often fund their lending with short-term borrowing or bank deposits.

Analysts estimate the nation’s six biggest lenders – Royal Bank of Canada, Toronto-Dominion Bank, Bank of Nova Scotia (Scotiabank), Bank of Montreal, Canadian Imperial Bank of Commerce and National Bank of Canada (OTC:) – will post an average decline of 4.3% in first-quarter profit from the previous three months and 12% from a year earlier, according to Refinitiv data.

BMO and Scotiabank start reporting results for the three months through January on Tuesday.

Bank CEOs have turned optimistic about 2021, driven by the deployment of coronavirus vaccines, although Canada has seen a slower rollout than some other developed nations.

First-quarter profit declines will be driven by margin pressure and modest loan growth, Canaccord Genuity Analyst Scott Chan said in a note on Thursday. But profits are set to benefit from strong mortgage growth driven by booming housing demand, and gains in capital markets and wealth and asset management units, Chan said.

Record provisions for loan losses (PCLs) taken in 2020 mean a significant increase in capital set aside is unlikely during the quarter, said Anthony Visano, managing director of Kingwest & Company, which holds shares in TD, Scotiabank and CIBC.

However, unlike U.S. banks that have already begun releasing some of their reserves back into earnings, Canadian lenders are likely to wait until later in the year to do so, he said.

“As the year unfolds, we should see the vaccine’s assist in terms of the loan growth books … sequentially, we should see improvements, especially when it comes to provisions normalizing,” Visano said.